Washington, D.C., May 25, 2015—As part of efforts to increase awareness of thyroid health on today’s 8th Annual World Thyroid Day, the Council for Responsible Nutrition (CRN) joins the American Thyroid Association (ATA) and its sister international thyroid societies in calling attention to the important functions regulated by a healthy thyroid. In particular, CRN is focusing on the role of iodine and its importance for thyroid and overall health, especially for women who are pregnant or lactating.

“Iodine is a nutrient that is critical for the production of thyroid hormones, and therefore, a deficiency in iodine can lead to thyroid hormone-related and other health problems,” said Duffy MacKay, N.D., senior vice president, scientific and regulatory affairs, CRN. “Additionally, pregnant or nursing women who are getting insufficient amounts of iodine can put their children at risk for decreased cognitive function, which is why CRN, and medical organizations, including ATA, The American Academy of Pediatrics, and the Endocrine Society, recommend that women who are pregnant or lactating receive a daily multivitamin/mineral supplement that contains 150 mcg of iodine.”

In addition to demonstrating iodine’s essential role for the health of women of childbearing age, scientific evidence has shown that getting enough iodine can help in preventing thyroid gland dysfunction, such as goiter, and various abnormalities related to the nervous system, digestive system or skin.

According to Robert C. Smallridge, M.D., president, ATA, “Tens of millions of people worldwide are affected by diseases of the thyroid. With World Thyroid Day, we are emphasizing the need for greater education and ways to prevent thyroid-related health problems. We are glad to see CRN participating in this educational effort.”

CRN’s recommended guidelines, “Iodine Quantity in Multivitamin/Mineral Supplements for Pregnancy and Lactation,” released this past January and applauded by the American Thyroid Association, can be found on CRN’s website. For more information on World Thyroid Day, visit: www.thyroid.org. 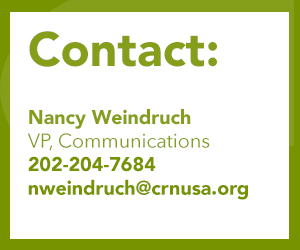