Please note, the CRN/NAD program will close as of July 2020, but companies can still file their own cases independently as always. Learn more...

Council for Responsible Nutrition (CRN) and 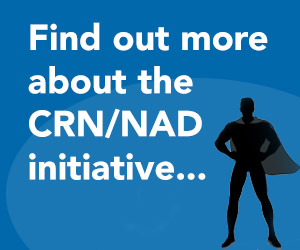 "Like all industries, we rely on the bond of trust between consumer and marketer. That bond has been stretched by companies that are clearly ignoring advertising laws that exist to protect the public as well as responsible companies that abide by those laws."—Steve Mister, President & CEO, CRN

March 26, 2007: With dedicated funding for an attorney to concentrate on claims made in supplement advertising, NAD will expand its review from an average of eight cases a year to nearly 30 cases in the first year. The first decision is issued in March 2007.

May 2, 2007: NAD refers the first case under the CRN/NAD initiative to the Federal Trade Commission (FTC) for further review.

May 30, 2007: CRN launches an advertising campaign directed to the supplement industry and aimed at building awareness of the CRN/NAD initiative. The campaign urges members of the industry to police the marketplace, using the tagline: “There’s a new sheriff in town. YOU.”

Nov. 13, 2007: The National Advertising Review Board, the appellate body of the advertising industry’s self-regulatory system, hears its first appeal of a case brought through the CRN/NAD initiative.

Sept. 23, 2008: J. Thomas Rosch, Commissioner, FTC, addressing the audience at the NAD Annual Conference, praises the dietary supplement industry and emphasizes the value of self- regulation.

“An excellent example of self-regulation working in this fashion is the initiative between NAD and the Council for Responsible Nutrition (CRN) that will increase monitoring of advertising for dietary supplements. CRN, the leading trade association for the dietary supplement industry, has launched an advertising campaign to encourage supplement companies to file competitive challenges with NAD. I think this campaign is wonderful—it empowers supplement companies who are, as the campaign puts it “tired of having the supplement industry referred to as the Wild West,” by encouraging them to file a competitive claim with NAD if they see a supplement ad that’s misleading, untruthful, or includes claims that can’t be substantiated. —J. Thomas Rosch, Commissioner, FTC

April 9, 2009: CRN Foundation, a 501 (c)(3) educational foundation of CRN, was created, and oversight of the CRN/NAD initiative formally transferred to it.

Nov. 9, 2009: CRN announces it will extend the CRN/NAD initiative for an additional five years. Under the extension agreement, NAD will receive $959,000 from the newly-formed 501(c)(3) CRN Foundation, payable in incremental, semi-annual grants, beginning November 1, 2009 through October 31, 2014.

“Responsible industries take actions that demonstrate their commitment to protecting their consumers seriously, and this self-regulatory program says to all companies that this industry won’t sit back and let misleading advertising serve as a hallmark for which our industry is known. In the three years this program has been in existence, it has gained momentum and widespread attention, becoming an example of responsibility for our industry.”—Steve Mister, President & CEO, CRN and President, CRN Foundation

Sept. 19, 2012: CRN announces a free, searchable compilation of all dietary supplement advertising decisions issued by the NAD. The search tool, available at no charge on CRN’s website, was created to assist dietary supplement companies in avoiding misleading, non- substantiated or deceptive advertising claims.

Nov. 1, 2014: CRN/NAD initiative extended through 2017 with funding provided by a cy pres award and matching funds from CRN to the CRN Foundation, totaling nearly $700,000.

April 15, 2015: A Working Group of the American Bar Association issues its report on the NAD process, noting as part of its broader findings “the beneficial aspects of programs involving industry associations” such as CRN. The group recommends that NAD continue to ensure that the criteria for opening cases are applied equally across the industry …”

“I would like to congratulate the Council for Better Business Bureaus’ National Advertising Division and the Council for Responsible Nutrition on the success of their 10-year partnership. The CRN/NAD initiative shows just how impactful meaningful self-regulation can be. With 250 cases challenging misleading and unsubstantiated claims for dietary supplements, the program has been a valuable complement to the FTC’s own enforcement efforts to eliminate fraud in  this industry.”—Edith Ramirez,Chairwoman, FTC

Oct. 28, 2016: CRN and the industry toast to the program’s 10 year anniversary at The Conference. CRN unveils a new campaign to the industry using a Super Hero and the tagline: Stand Up for Truth in Advertising.