"People are living longer than ever before. While this is certainly a positive development, these additional years are not necessarily in good health. There needs to be increased awareness of the importance of nutrition interventions as a measure of healthcare quality, that can be established before the problem inevitably worsens." 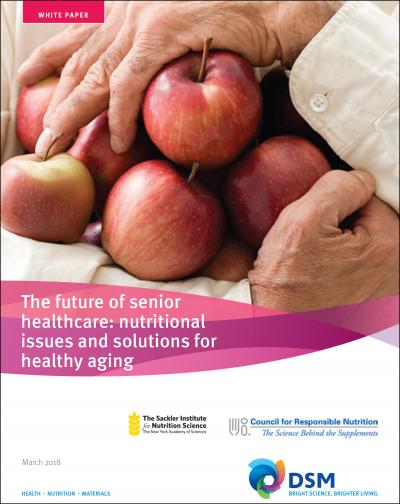 People are living longer than ever before. While this is certainly a positive development, these additional years are not necessarily in good health. The twilight years are often accompanied by a range of non-communicable diseases (NCDs) and other age-related chronic diseases that can significantly affect an individual’s quality of life. The so-called Silver Economy, which considers the economic opportunities associated with the growing public and consumer expenditure resulting from an aging population, should be a sign of social and economic progress, but instead it has become a drain on a number of different resources. Not only has an aging population placed a burden on healthcare systems around the world, but it also has an indirect impact on individuals’ families and wider society.

Aging, however, has become more complex in recent years, as it is increasingly difficult to define an ‘older person’. Some 80-year-olds appear to have the mental and physical capabilities of somebody much younger, while others of the same age are dependent on everyday care. The question of why some people age healthier than others has been the subject of extensive research over the years. Although there are still knowledge gaps among healthcare practitioners and the wider scientific community, extensive studies are highlighting the importance of nutrition as part of a preventative approach to age-related chronic disease risk reduction. The concept of ‘healthy aging’ should therefore be a priority for public health agencies, to reduce the risks associated with age-related and infectious diseases, and help ensure our later years are as healthy as possible. With the number of older people set to grow even more in the next few years, we will face a global health crisis unless action is taken soon. There needs to be increased awareness of the importance of nutrition interventions as a measure of healthcare quality, that can be established before the problem inevitably worsens. This white paper has been developed by DSM in collaboration with the Sackler Institute for Nutrition Science and the Council for Responsible Nutrition (CRN), and will be distributed in conjunction with the New York Academy of Science’s ‘Hidden hunger: solutions for America’s aging population’ event on March 23, 2018 in Washington, DC.

Although life expectancy has dipped in the last two years, it still remains high. The global population of people over 60 years of age is expected to double by 2050 to more than 2 billion. Not only this, but the number of people over 80 is predicted to be three times higher in 2050 than it was in 2013. As such, the concept of healthy aging is becoming more important than ever. Functional ability is made up of intrinsic capability, comprising mental and physical capacities, as well as environmental factors, such as a person’s relationship with home, the community and wider society. Although a recent study found that some people have a faster innate aging rate than others, the majority of research on centenarians has focused mainly on genetics as a key factor in longevity. Given the prevalence of chronic and infectious diseases in later years and the disparity between nutrition and health, investigating the role of lifestyle factors could prove beneficial in supporting adults to age in a healthy way.

Maintaining adequate health and nutrition as we age is a critical concern for people across the world. According to a consumer survey, 55% of adults globally find it important to stay ‘young’ for as long as possible. Although 26% of people currently worry a lot about their health, their future health presents even more of a concern; 35% of adults worldwide are already thinking about their health over the next five years. Among these concerns, mature adults over 51 years worry specifically about protection against disease in later life, as well as bone and joint health.

It is well established that Americans are falling short of key nutrients, but new research shows that low-income Americans are at greater risk for essential nutrient shortfalls than Americans from higher-income households. Dietary supplements, like the multivitamin/mineral (MVM), provide shortfall nutrients and have been shown to help fill nutrient gaps.
Read more about Multivitamin/Mineral (MVM) Inclusion in the Supplemental Nutrition Assistance Program (SNAP)